The Arrows – Ford Cosworth A3 n.29 is a car that participated in the Formula 1 World Championship in 1980. The British team entrusted the design of the new car to Tony Southgate and Dave Wass. The traditional Ford Cosworth engine and the Hewland gearbox and Goodyear tires fitted an aluminum monocoque with a golden livery from the beer brewer Weirsteiner.

Riccardo Patrese with the Arrows – Ford Cosworth A3 n.29 arrived ninth in the 1980 Formula 1 World Championship, achieving a second place as best result. The Italian driver scored points only twice a season and in the Long Beach Grand Prix finished second behind Nelson Piquet’s Brabham. Together with team-mate Jochen Mass, they failed to achieve great results due to the car’s fragility.

The German seventeenth in the world championship with four points, was the protagonist of an accident in Austria that caused him a back injury, the team replaced him in the last races with Mike Thackwell and then with Manfred Winkelhock, but both failed to qualify. 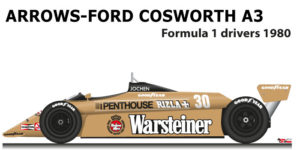 At the end of the season, Arrows finished seventh in the constructors’ championship won by Williams FW07B and world champion Alan Jones.

By purchasing the Image Arrows – Ford Cosworth A3 n.29. You will receive an email with the link to download the image. Once purchased this will always be available in your account.

There are no reviews yet.

Be the first to review “ARROWS – FORD COSWORTH A3 n.29” Cancel reply